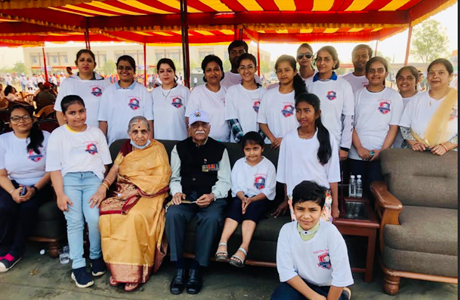 Raipur. Indian Army in association with Venkateshwar Signature School organized a Cyclothon and Walkathon on 14th March 2021 in honour of the valiant Veterans of the 1971 Bangladesh Liberation War. The year 2021 marks the Golden Jubilee (Swarnim Vijay Varsh) of the historic military victory of Indian Armed Forces over Pakistan. This decisive victory resulted in Pakistan ceding control of the then East Pakistan, thus paving the way for the birth of the sovereign nation of Bangladesh. Swarnim Vijay Varsh Celebrations were inaugurated by Prime Minister Shri Narendra Modi by lighting the Swarnim Vijay Mashal from the eternal flame of National War Memorial, New Delhi on 16 December 2020.
Venkateshwar Signature School is led by the visionary Capt. Ankur Dhillon who was commissioned in the elite 8th battalion of the Sikh regiment. He has served the Indian Army for nearly a decade with élan and accomplished what remains to be a dream of many officers. A commando who excelled during training at Indian Military Academy and thereafter at every course of instruction he attended.
Capt Ankur Dhillon was selected to represent the country at United Nations and over there, again, handpicked for special role on the basis of his excellent Army career. He led his troops by example at insurgency infested areas in Manipur and Kashmir valley. He has sustained several battle injuries in ongoing proxy war but continued with his indomitable spirit as he firmly believes the age old adage “When the going gets tough, the tough gets going”.
A total of 100 parents and students out of 2000 participants participated in the Walkathon and Cyclothon on 14th March morning. The 25 kilometers Cyclothon and 7 kilometers Walkathon encompassed the areas the International Cricket Stadium and Naya Raipur. Satviki and Purva Sharma, VSS felicitated Brig. Prashant Chauhan, SM, Commander HQ COSA. The Hon’ble Brigadier boosted the spirits of the students and wished them success in all walks of life. VSS salutes the dauntless spirits of our brave soldiers who have sacrificed their lives for the country.