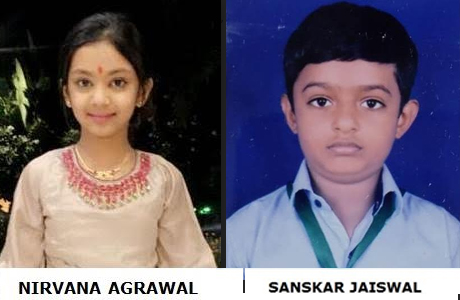 Bhilai. It was a proud moment for Rungta Public School, Bhilai that runs under the aegis of Sanjay Rungta Group of Institutions when two students Sanskar Jaiswal and Nirvana Agrawal brought laurels to the school by securing high positions in the International Ranking in the International Mathematics Olympiad (IMO) conducted by the Science Olympiad Foundation (SOF). Sanskar Jaiswal of class V claimed the 7th Zonal Rank and secured 15th position in the International ranking. Another student of class III, Nirvana Agrawal got the 11th position at the zonal level and has bagged the 16th position in the International level. Both these achievers have been awarded with medals and certificates of distinction along with exciting gifts from SOF. Advita Verma of class VII is also the proud recipient of the Medal and certificate of distinction.
It’s heartening to note that Miss Nirvana Agrawal has also secured 2nd position International General Knowledge Olympiad and International English Olympiad.
The Chairman of the SRGI group, Shri Sanjay Rungta, Director, Shri Saket Rungta, the CEO of the school, Mr. Arup Mukhopadhyay and all the staff members congratulated these achievers for their brilliant performance and great achievement and showered them with blessings for many more such achievements in the future.